Is a hat a frivolous accessory or a necessity? When looking into its history it quickly becomes apparent that it has been both.

Headwear for women began in earnest during the Middle Ages when the church decreed that their hair must be covered. 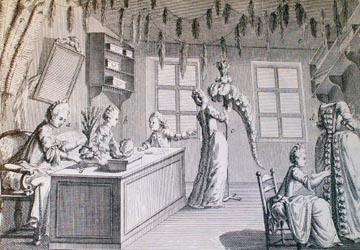 During the 18th century, milliners took the hat-making art out of the home and established the millinery profession. Today, a ‘milliner’ defines a person associated with the profession of hat making. In the 18th century however, a milliner was more of a stylist. Traditionally a woman’s occupation, the milliner not only created hats or bonnets to go with costumes but also chose the laces, trims and accessories to complete an ensemble. The term ‘milliner’ comes from the Italian city of Milan, where in the 1700’s, the finest straws were braided and the best quality hat forms were made. 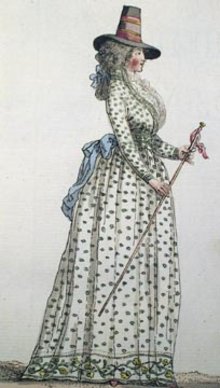 Pancake style ‘shepherdess’ hats were popular throughout most of the 18th century, in varying brim widths. These hats were considered necessary to keep the sun away from fair complexions, especially as the parasol was not a fashionable accessory during this period.

In the 1770’s (when huge wigs and hairstyles were fashionable) the ‘calash’ bonnet was worn to protect the high hairstyles from the weather. Collapsible bonnets, they were made of strips of wood or whalebone sewn into channels of a silk hood. A front ribbon allowed the wearer to hold the calash securely over her face while walking in the wind.

A taste for simpler fabrics in the 1780’s, anticipated the more democratic styles that followed the French Revolution. Cotton was introduced as a fashion fabric. Simple cotton house bonnets ornamented with a separate ribbon became fashionable for all echelons of society. The elite still wore hats (sometimes atop the bonnet) with tall crowns adorned with wide silk ribbon bows. Hats fell from favour after the French Revolution. They were associated with the upper classes and it was considered stylish to be democratic. Turbans were introduced into English fashions in the 1790’s and remained fashionable until the 1820’s. Style inspiration came from England’s increased trade with India for cotton. This was necessitated by inaccessibility to other cotton markets, namely Napoleon’s Egypt and the United States, with which relations were still poor. 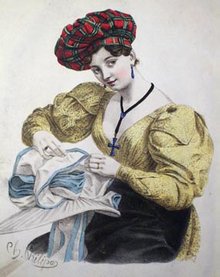 In the 1810’s straw bonnets were de rigueur. Alternatively, inexpensive ‘bonnet board’ was used. It was made of cardboard, then pressed in a roller machine to create a design. Bonnet board was also a response to lack of trade goods from Napoleon’s Italy, the traditional source for quality straw bonnets. Experiments with silk covered buckram proved successful for creating bonnets. It was used briefly in hats of the 1820’s that were decorated with towers of panaches (feather plumes) and silk bows.

By 1830 bonnets grew to huge proportions. A large brim framed the wearer’s face from the front but hid her profile from the side. A veil protected her identity and propriety as well as her delicate skin from the sun’s rays.

Brim size decreased dramatically in the 1840’s but still covered most of the wearer’s hair and much of her face. From the mid 1850’s the bonnet’s depth reduced to expose more of the face and hair. The ‘Bavolette’ was a ribbon frill at the back of the bonnet. Its purpose was covering the neck, which was considered an erogenous zone in the mid 19th century. Necks were only on view with evening dress! Once again, a brief foray into hats over bonnets occurred in the late 1850’s when the ‘wide-awake’ was introduced. It was a revival of the 18th century shepherdess hat that sported a broad brim and shallow crown.

THREE WOMEN IN A BOATER 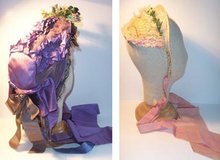 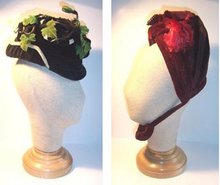 By 1860 parasols had become a fashion staple and bonnets, except for cold weather wear, became purely ornamental. Due to their reduced functionality, bonnets decreased in size throughout the decade. Styles began with the ‘Spoon’ bonnet named for its shallow shape. It had a peaked crown that could be decorated with a nosegay of flowers.

The even smaller ‘Fanchon’ was popular in 1865. It was little more than a triangular shaped piece of straw or silk, often with wide ribbons that framed the wearer’s chin.

Throughout the 1860’s hats began to be re-introduced into the wardrobe. They included Glengarry highland caps and little circular pork pie hats. Tyrolean style peaked crown hats and little doll hats appeared at the end of the decade. The doll hats were decorated with cockades of feathers. They were worn perched at the front of the head over enormous hairstyles. 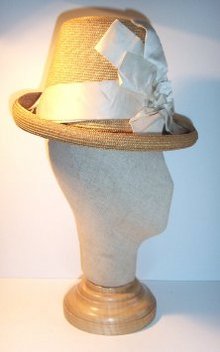 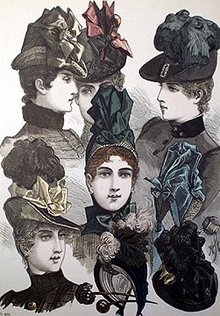 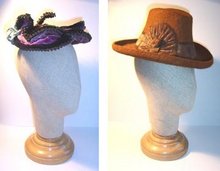 Throughout the 1870’s and 1880’s, hats and bonnets were on a fashion par. Women who wanted a more modest appearance often preferred bonnets. Sadly for bonnets, this eventually associated them with a matronly appearance. Very tall hats of the mid 1880’s were known as ‘3-story’ or ‘flowerpots’ and for very good reason. They soared atop the hair, appearing as if a roof on the tower of a building. This style originated as a revival of a late 18th century woman’s riding hat. That in turn was a copy of a man’s style of the same period.

Masculine styled clothes and hats entered women’s wardrobes in the 1890’s via new forms of sporting and activity clothes. ‘Boaters’ and ‘Trilbys’, previously considered masculine, were now appropriate wear for all but the dressiest of occasions. Hats downsized in the middle of the 1890’s but grew in width again by 1900 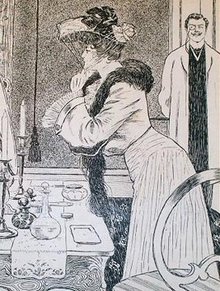 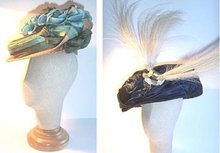 In the early Edwardian period (1901-1907) it was fashionable for a lady’s silhouette to resemble an S-shape. The hat was an essential element. It was worn on top of piled up hair and positioned to cantilever over the face. This curvaceous form was carried through the bodice that was pouched over the waist and ended in a trained skirt. Also popular in this era was the ‘toque’, the name given to a brimless hat.

After 1908 the silhouette became more slender. Conversely the hat became increasingly larger. By 1911 hats were at their largest, often with the brim extending beyond the breadth of the wearer’s shoulders. To secure these huge creations to the head, hat pins – sometimes as long as 18 inches – were skewered through the hair and hat. The hatpin had other advantages too. Any man who attempted an unwanted advance soon discovered that a hatpin was all a frail woman needed to defend herself.

During the First World War hairstyles decreased in size so hats gradually began to sit lower on the head and, generally speaking, became quite plain. Large plumes and ornate decorations were frowned on. It was considered unpatriotic because it suggested that the wearer was more concerned with her own appearance than with the war effort.

By the end of the war and in honour of the soldier’s girlfriend (the era’s heroine) the fashionable ideal was for a youthful look. Hats slipped down the head, making the wearer appear as if she were dressing-up in her mother’s hat. Conveniently, the deeper crown also provided more security in keeping the hat in place while traveling in an open car.

BY GOSH – THE CLOCHE

The crown continued to deepen in the 1920’s, eventually covering the entire head in the ‘cloche’ style. Brims were optional but usually utilised only on summer hats, where the brim acted as a visor from the sun’s rays.

By the early 1930’s crowns became shallow once again to accommodate the decade’s fuller curled hairstyles. Wide brimmed hats were popular. On hot summer day’s they acted like parasols, which were now out of fashion. Mannish styled ‘fedoras’ were perfectly suited to wear with tailored suits. By the end of the decade, crowns began to grow upward much like the 3-story hats of the 1880’s 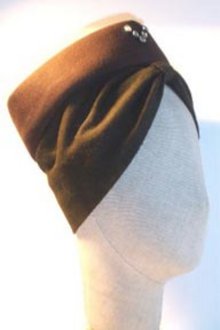 The wartime 40’s saw a huge variety of hats that were suitable for any face shape, hairstyle or personal preference. Throughout the war and on both sides of the Atlantic, elaborate creations brightened dreary utility fashions, brought about by rationing. In fact the only items not rationed were hat materials. Explosions of feathers, veiling and artificial flowers were popular. They were dubbed in France as ‘piece de resistance’ or ‘resistance piece’ against Nazi occupation. The ‘Doll’ hat, a very small hat that perched on the very front of the forehead, revived Victorian styles. There was also a brief resurgence of the bonnet, as well as turbans and halo hats. The latter sat on the back of the head and framed the face and the fashionable upswept pompadour hairstyles. 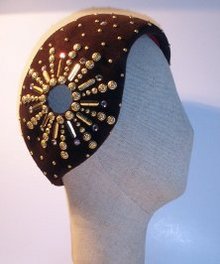 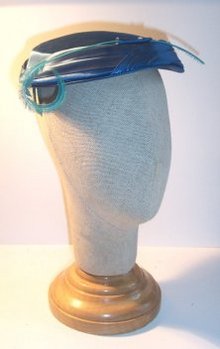 Post war 1940’s and 1950’s saw many women choosing not to wear hats on a regular basis. To preserve its market, the millinery industry set about creating variety and extravagance. Generally speaking hats remained small and close to the head. They were now touted as the essential accessory to complete the ensemble. Alternatively, ‘pancake’ or ‘cart wheel’ hats sat flat atop the head reviving turn of the century styles. By the late 1950’s the turban returned to fashion. As hairstyles grew in size in the early 1960’s, hat styles had to adapt. In vogue were tiny poufs of veil or pillboxes that perched on the back of the head. 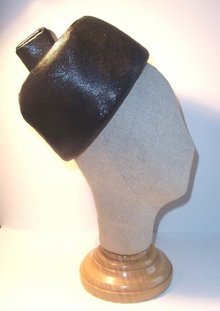 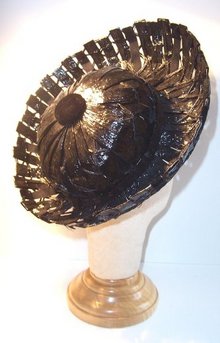 UNTIL THE HAT LADY SINGS

As fashions of the mid 1960’s were geared for youth, which wore hats sparingly, headwear became an accessory of the past. Even the Catholic Church dropped its dress code, abandoning required head coverings for women in 1967. With the exception of cold weather wear, the fashion hat all but disappeared in the 1970’s. Credit goes to Princess Diana’s influence in the 1980’s that met with some success in bringing hats back into style. More recent attempts to bring back the hat have centered on health in response to holes in the ozone layer. This has given reasons to think about hats once again. In reality, its role as the necessary accessory is long gone. Until the next time! 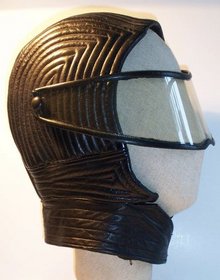 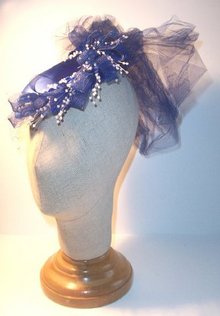