They were unique. They were of their time. And they were ours. And now, they are all but gone. Like so many other American cities, Louisville once had scores of local clothing stores that were institutions. One grew up and learned to shop were one’s mother and aunts shopped, not unlike following family traditions regarding one’s choice of church, doctor and attorney. Ladies went downtown to shop to the flagship buildings of Stewart’s, Selman’s or Kaufman – Straus or a bit later to the Art Deco Byck’s. If you went to Stewart’s, you wore a hat and gloves and went to lunch on the Orchid Tea Room. If you were a doctor, you shopped at Martin’s; a banker at Rodes-Rapier. . . 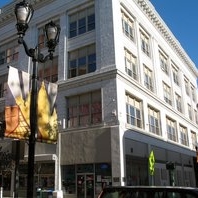