Louella Ballerino (1900 -1978) was a young mother when she first embarked on a professional design career in the mid to late-30s. She had studied with MGM costume designer Andre Ani (over 40 films, c. 1925-1930) while an art history major at the University of Southern California. When her family found themselves in financial difficulties after the Depression, Louella returned to a student money-making scheme of selling fashion sketches to wholesale manufacturers. She could make $125 a month from these drawings. 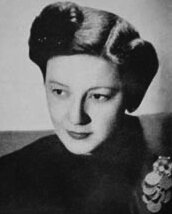 Louella’s designs started to be used in the dress shop too, while at the Institute, her teachers decided to promote her to tutor classes in Fashion Theory.

After gaining further experience with manufacturers, Louella started her own custom business in partnership with a friend in the late 30s or c. 1940. The partnership later became a solo venture, illustrating the instability of a design-business without a full industrial co-producer, or a moneyed backer.
But apart from being fostered by the academic art school atmosphere, Louella Ballerino seems to have drawn strength and commercial support from the local California design movement, a trend driven both by the West coast lifestyle and the response to it by a new wave of fashion designers and manufacturers, a group of ‘Californian Fashionistas’ with whom Louella consistently showed her designs through the late 40s.

In the late 30s and 40s, a great increase in the ability to travel by car, plane and boat led to a boom in American tourism to California and the South West. Society in resorts such as Palm Springs demanded a newly flexible, relaxed, yet still spectacular leisure wardrobe centered around coordinated sun separates, sportswear, afternoon and evening dresses.
The ingredients for this new style came from a striking rediscovery of California’s Spanish heritage and Mexican surroundings, and, further afield, America’s sub-tropical neighbours in the Pacific and Caribbean.

This was a movement out of which Tina Leser emerged so successfully. In contrast to Leser’s globetrotting, however, Ballerino was home-bound and California-based. Her style-sampling and wide-ranging research originally largely took place in the library and, later, her own costume design collection, from whose tomes full of historical or ethnic fashions she sourced ideas.
In 1945, Beryl Williams commented ‘She likewise studies in museums and galleries and history books, and whenever she has a chance she travels to further enlarge her sources. Every imaginable type of native art has been investigated… and every time she puts even the narrowest border around a cotton skirt, she is careful to be sure that its basic pattern is an accurate representation of the traditional one from which she derived it.’

The leisure and play-wear repertoire around which Louella based her collections consisted of one-piece informal dresses, both casual and smart ‘sports’ separates in matching or coordinating sets, and beach-sets. The popularity of this leisure wardrobe ~ and the new ethnic mixture of styles that came with it ~ reflected a shift in everyday Americans’ lifestyle and identity. Louella Ballerino’s own exploration of this trend took it to ever more novel and distant destinations…

From the New York Times Dec 5 1943
“Los Angeles designers have once again come through with interesting designs keyed to present times. They show and all-American influence taken not only from our own Indians but also from our Latin-American neighbors. Mexican colors are strongly in evidence. Designs are taken directly from old Guatamalan patterns. Styles are feminine… 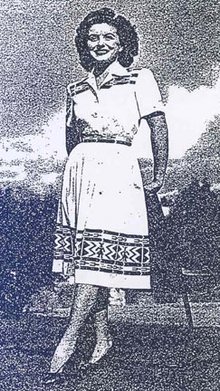 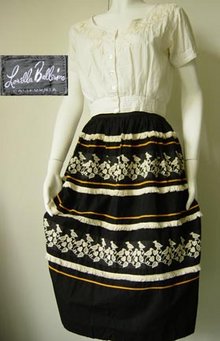 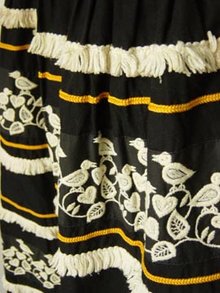 The dirndl skirt, separate, or in a dress, was one of Louella Ballerino’s first and continuing successes; the barrel or horizontal banding visible here on a c. 1949 skirt, was one of her favourite and most characteristic adornments. A banded decoration gave Louella the opportunity to lift authentic designs direct from two-dimensional book illustrations, or in transferrable rolls of applique direct from a cottage-manufacturer and apply them on to her garments.

The popularity of a single design, a hop-sacking dress with a dirndl skirt decorated with an African yarn figural design from the Tongan tribe, gave Louella the wherewithall to start her own idiosyncratic design house.

From 1949, a later version of the banded full skirt, similar to one shown in a group of ‘Cotton Fashions’ at the Ritz Carlton Oval Room, New York, April 1949: Louella Ballerino’s contributions spoke of the outdoor life of California. A hot-orange denim was made with front-buttoned bra and shorts. In the peasant mood was a white cotton with off-the-shoulder decolletage and barrel skirt banded in peasant embroidery over the hips. (Virginia Pope)

Experimentation in pattern and ethnic style led to greater experimentation with form: Ballerino followed her dirndl launch with a range of ‘full-trousered Dutch-boy slacks, with short double-breasted jackets in a contrasting colour.’ and her later frock and beach set designs (below…to come) show a desire to innovate in how each garment is worn – for example, doubling a overskirt on a dress, or a wrap skirt in a beach set, as a bolero shoulder cover-up, or a cape..

Guatamalan and Mexican-patterned sports separates like Louella’s became immediately popular in the 40s. The Second World War brought the rest of the world closer, and specifically for America’s West Coast, built on an existing fascination with Hawaiian styles and in addition heightened awareness of south-east Asian silks, brocades and patterns. 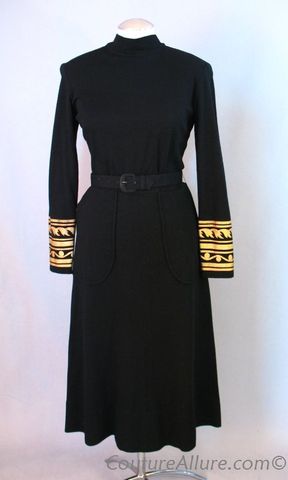 But influences came west, too. This mid-40s sculptural sundress seems to reach beyond Californian villas for inspiration, to Old World Spain.

In the 1930s, Austrian manufacturer Lanz had already scored a great success in California with their Germanic-peasant influenced designs, a popularity that persisted through the early years of the war.
Ballerino’s ‘play frock’ from the mid-40s seems to pick up on the trend for Mittel-European milkmaid freshness, again using embroidered motifs with delicate precision. This might be the outfit described in the New York Times of November 8th, 1945 when Ballerino, one of four exhibiting designers, showed a ‘black peasant dress bordered at the deep, round neckline with white lace.’ although the journalist here saw it as drawn from ‘Mexican inspiration’.
And now for the dress nominated My Most Desired Ballerino Design, a 1946 ‘Sari Dress’ illustrated in the New York Times of Jan 15th. 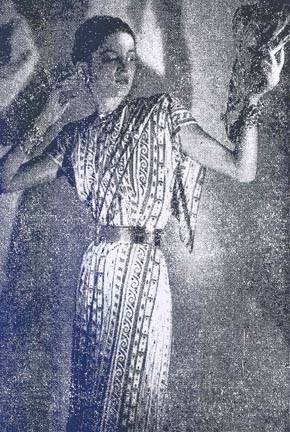 The caption reads: “A print showing an Indian derivation is used in a frock of rayon jersey. The scarf may be looped through the waist or worn over the shoulders. A Louella Ballerino design at Stern’s. Now the overall effect may be pseudo-Bombay, but the details are all Ballerino-esque – a print featuring strong stripes which are played with in the cut, a flexible scarf, to be worn like a semi-detached peplum, or like a shawl…”

According to one contemporary report (Fashion Fundamentals, 1947) Ballerino, like Tina Leser, pioneered the use of hand-blocked printed designs on dresses, and her taste for innovative prints only continued. With the close of WWII, the next few years saw a great period of success for Louella Ballerino, as wider partnerships gave her access to the raw materials and distribution which allowed more people to appreciate her designs.

Louella & Jantzen ~ 1946-48
Louella’s work for wholesalers was diverse and often apparently fleeting, but one of her most successful partnerships with a manufacturer was a two to three-year design contract with Seattle swimwear manufacturer, Jantzen. LACMA now holds several 1954 men’s suits donated by the company’s designer Maurice Levin, ‘in memory of Louella Ballerino’, a gift which seems to acknowledge the importance of her designs to Jantzen. in 1946, the collaboration was first promoted equally with the third link in the manufacturing chain, Bates Fabrics: 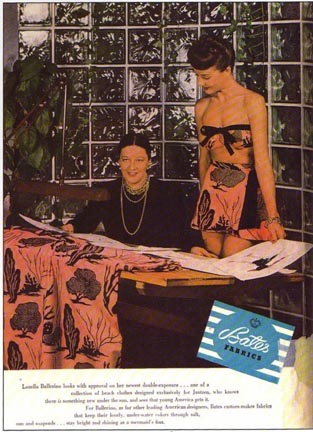 Louella Ballerino looks with approval on her newest double-exposure, one of a collection of beach clothes designed exclusively for Jantzen, who knows there is something new under the sun, and sees that young America gets it For Ballerino, as for other leading American designers, Bates custom-makes fabrics that keep their lovely, under-water colors through salt, sun and soapsuds stay bright and shinging as a mermaid’s fins.

And here’s a surviving suit in the very same Bates ‘Sea Fern’ fabric; these Bates fabrics were specially ordered by Ballerino for her Jantzen range and this set echoes the print/black alternating design of the advert – although she is not credited on the label, this must be one of Ballerino’s designs. It was perhaps only the following year that her stock had risen sufficiently for Jantzen to weave Louella’s name into their labels for the high profile promotion of a new range of innovative play outfits she produced for them. 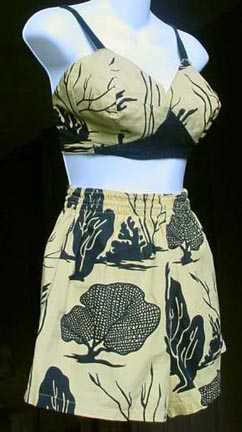 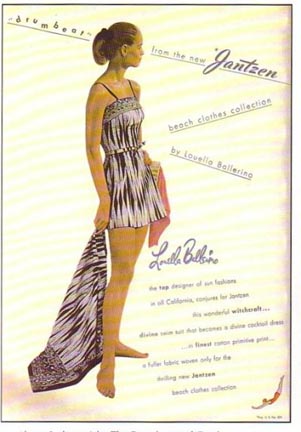 Each style group was tailored to tune into a spectacular, specially selected fabric pattern, so that each evoked specific exotic or historical themes. Two other lines which accompanied this Africa-themed set included: ‘Candy Cane’ a strong black and white striped American-retro styled set, and the beautiful ‘Carte Blanche’ white rayon set, with scrolling green border-work.

From perhaps the same, or a subsequent year, a charming cotton plaid three-piece beach set preserved in two colourways, from the extensive, top of the range wardrobe collected by Helen South Alexander of Spokane, a lady of great discernment, going by the rest of her high-fashion, made-to-order wardrobe. The set’s ruffles show the influence of a favourite inspiration piece: the peasant apron; the use of plaid draws on American folk-history. Simpler fabric designs drawing on historic national styles balanced out the exotic in the Jantzen Ballerino ranges.
The style of these more mass market sets was perhaps prefigured by Louella’s 1945 collection, which included a ‘lime-green shorts-and-bra costume worn with a full wrap-around peasant skirt inset with black-diamond motifs’. In 1946, she showed a beach-set at Altman’s Sun and Surf shop which included a three-tiered skirt which doubled as a cape. Characteristically, the most basic three-piece leisure garment could be converted into a deceptively simple combination of ingenious designs. 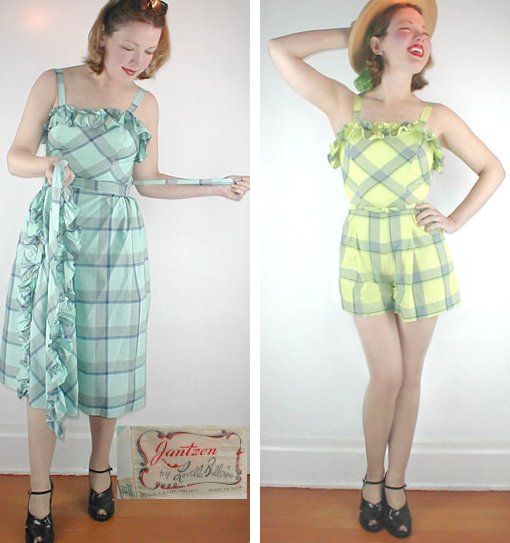 Louella is credited on the label of these sets, unlike the earlier Bates/Ballerino/Jantzen products (above).

The most visible phase of Ballerino’s career is the 40s decade. She is first noted nationally c. 1941. After her success with Jantzen, Louella’s fashions are regularly given favourable notice in reports on Californian fashion.

She became part of the group of ‘Affiliated Fashionists of California’ as it crystalized on the national stage in the late 40s, appearing particularly consistently alongside Agnes Barrett, but also, c. 1949-50 with Peggy Hunt, Marjorie Montgomery, Viola Dimmitt and other prominent Californian sportswear firms.
Where the personnel of the shows fitted, this group would style themselves ‘designing women’, although the composition could be fluid. Ballerino also appeared outside the umbrella of Californian fashion, showing in New York in themed shows for Bogart’s Cotton Shop and Altman’s Surf and Sand shop, among others. 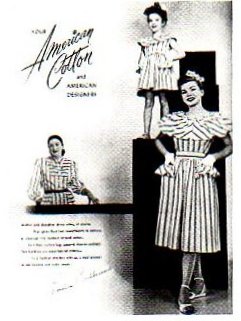 Left: 1948, Ballerino’s new matching ‘Mother & Daughter’ fashions (along with herself) featured in an ‘American Cotton’ ad;

But where next? Press references to Louella Ballerino peter out c. 1951-52, just as some of the leisurewear design elements she pioneered had permeated popular fashions country-wide. Her industry collaborations over the years had been interesting but not long-lasting, and it is possible that she dropped off the radar in response to a necessity for wider distribution in the 50s, which she could not meet.

Originality – Louella taught her students to give up on originality, since everything – a line, a colour, a feature – had been tried before somewhere, sometime. She turned this fatalism into a strength, researching the world in the firm expectation that it would present her with something interesting to look at.

Interest – the ‘point of concentration’ was where Louella’s ideas started, whether it was a costume print, piece of embroidery, or merely a scattering of ‘coloured paper scraps’. When in doubt, the rule was, create a focus of interest; this was Louella’s strategy when stuck for a lesson plan: ‘I deliberately wore bizarre clothes to class… they were, I admit, rather extreme… frequently a daring drapery line or a great clanking piece of jewellery served the purpose of distracting my students…’