Okay, so it may not be the capital of couture, but there is a certain look associated with this vibrant city. Remember Sharon Stone in Casino and what do you see? Acid coloured crochet pantsuits with bare midriffs, pale pink lipstick and big blonde hair.

Dino or Frankie or any of the Rats might enjoy lounging about backstage in a silk robe…
You only have to say ‘Rat Pack’ to conjure up images of shiny sharkskin suits and cigarette ash adorned lapels set off by narrow-brimmed straw homburgs. Think about Elvis jeweled leather jackets, show girls with feathered headdresses and mobster’s molls in white mink coats in the dead of summer. There is a lot of style in Vegas, which is kind of odd when you consider this is where museums are optional and the oldest buildings standing aren’t old enough to drink in most states. 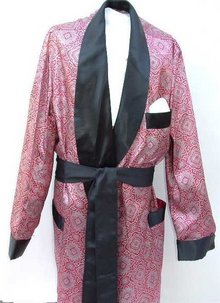 Las Vegas means ‘The Meadows’ in Spanish, an ironic term for a tiny oasis in the middle of a desert. But that’s Vegas – it’s all about irony. Back in the 1850s, almost a hundred years before the hotel-casino concept, Las Vegas consisted of a Mormon fort where it was illegal to flip a coin to settle a wager!
Founded on May 15, 1905 as a whistle stop tent-town of saloons, stores and boarding houses for the Union Pacific Railway, Las Vegas wasn’t much of a town at all. In 1931, the Nevada Legislature legalized gambling and construction was started on the nearby Hoover Dam. Here’s that irony again because it was just when most of America began to feel the effects of economic hardship during the Great Depression that Las Vegas began to prosper.

In 1941 the first of many Hotel-Casinos, the El Rancho Vegas opened. During World War II, Vegas resort growth was stalled but by the end of the war, the building of hotel-casinos was booming under the night illuminations of Atomic tests. While the El Rancho Vegas followed a western ranch-styled theme, the most famous post war hotel-casino – the Flamingo Hotel, was modeled after a Miami style resort. It was operated by mobster Benjamin ‘Bugsy’ Siegel. Opened on New Year’s Eve 1946, the Flamingo sported a giant pink neon sign and replicas of pink flamingos on the lawn. 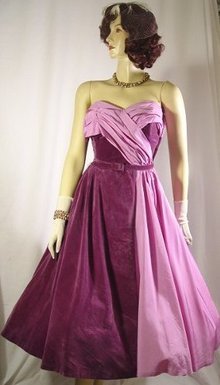 Las Vegas was a poster child for post war America and basked in its Golden Age of the 1950s and 1960s. Hotel-casinos opened one after the other: The Desert Inn, Sands, Riviera, Hacienda, Dunes, Tropicana, Stardust, Fremont, Moulin Rouge? the list grew with each passing year.

And to keep patrons entertained, many a comic and singer’s career was made, maintained or revived in the lounges or on the stages of Las Vegas including: Buddy Hackett, Don Rickles, Alan King, Shecky Greene, Wayne Newton, Robert Goulet – yes even Elvis! 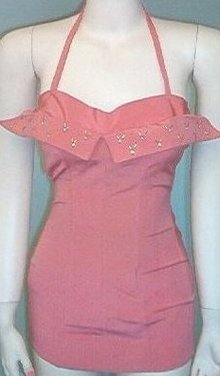 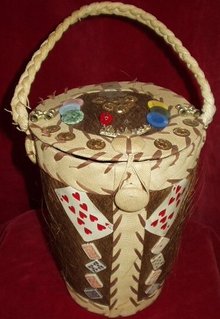 In 1957 Las Vegas brought the French idea of the stage spectacular to its town. In a style copied straight from the Folies Bergères in Paris, it launched topless showgirls before an American audience. To many Americans, it was an eye-opener because this form of entertainment hadn’t been seen in the US since the death of Vaudeville Burlesque.

‘NO’ was the big word in those golden days: no cover, no minimum, no state speed limit, no sales tax, no waiting period for marriages, no state income tax and no gambling regulation. Las Vegas boomed under this ‘no holds barred’ system. However, by the early 1970s the rules had started to change. Federal and State legislatures imposed taxes, speed limits, and strict gambling regulations. 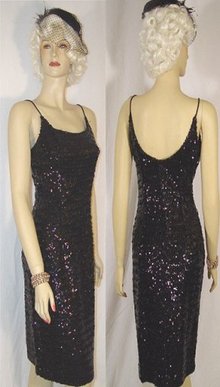 In 1976, casino-style gaming was legalized in Atlantic City, N.J. and Las Vegas had to adapt to survive the competition. The mega-resort began to replace the hotel-casino to attract all types of vacationers, from high-rolling gamblers to conventioneers with families in tow.

Today, the one-arm bandits look more like video games. Theatrically costumed gymnasts from Cirque du Soleil have largely displaced topless showgirls as star attractions. The old hotels are gone. Ashtrays and matchbooks languishing in drawers and trunks about the country are the only reminders of that golden age when you could play and win, or lose, Las Vegas style.