A noteworthy event of 20th century American fashion was the emergence of the film costume designer as an influence on everyday fashion. Prior to the 30s, Hollywood imported European fashion designers to bring some much needed style and class to their offerings after the excesses of the 20s. When the Paris designers returned home, Hollywood designers came in to their own designing both period epics and modern fashion features.

Due to the success of both the film industry and the untiring efforts of the studio publicity departments, many costume designers became house hold names and used this recognition when they made the shift to fashion design. They were certainly helped in the USA by the absence of French and English fashion during the war years. By the time their houses closed in the 50s and 60s, the influence of film designers on retail fashion had begun to fade. Today even most fashionistas can’t name a film costume designer. And yet in their day designers such as Howard Greer, Adrian, Irene, Helen Rose, Edith Head and Travis Banton were as well known in the US and even internationally as many Couture designers.

The greatest of them all was possibly Adrian, whose work in film and fashion influenced much of American fashion in the 1940s. His fashion work commands serious attention to this day. Greer was an earlier star, but his work went on for years, and was seen as recently as 2005 when Sarah Jessica Parker wore a black and pink Greer dress to the CFDA awards. Both Irene’s and Helen Rose’s work continues to be highly collectible. Banton and Head, while influential, never attempted their own wholesale houses.

Read more about notable designers in the film industry

Click the titles to buy the books. As an Amazon Associate the VFG earns from qualifying purchases.

The Vintage Fashion Guild offers sincere thanks to the following contributors: 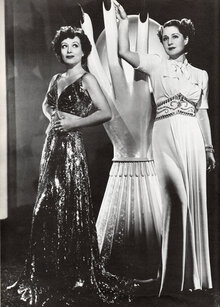 Costumes by Adrian
← previous next →