The words of Carmen de Tomasso, looking back on her career, in 1989, sound somewhat absurd coming from a Paris couturière who resided in a veritable treasure trove of Louis XVI furniture and rich tapestries. But in 1950, ‘Carven’, as she renamed herself, was something different.

In 1947, Dior had reasserted the luxury of Paris design with the lavish New Look. Carven, who established her maison at the Rond Pont des Champs-Elysses in 1945 (having possibly first attempted to start her business in 1938), followed an altogether different, more modern tack.

Carmen de Tommaso was born in 1909 in Châtellerault France (north of Poitiers). She first trained in interior design and architecture at the école des Beaux-Arts. Her much-repeated story of how she decided to start designing began with her problem, at the height of five foot one inch, of finding clothes to fit; ‘You’ll never be elegant,’ her mother told her.

Using her eye for proportion and ornamentation, trained further by her time at the Beaux-Arts, Carven began to create simple, slender designs which catered to and lengthened small figures. Not only that, but she worked in a new repertoire of sports and leisure wear that paralleled the work of contemporary American designers, such as Tina Leser and Claire McCardell.

The love of a ‘Golden Age’

Carven drew inspiration, like her transatlantic counterparts, from world travel, artistic motifs, and innovative visions of how to wear clothes. Yet she was also quickly admitted to the traditional Chambre Syndicale de la Haute Couture as an accepted designer. Her sampling of the world reflected French involvement in international affairs, from Tahiti to Africa and Indo-China. Her taste and flair became a prominent part of her appeal, marketed to an international audience as the ‘breath of youth’ (England) or ‘a wardrobe for teen-agers’ (America).

Carven’s exquisite taste and enviable life-style became the background of her designs and a means of promotion. Her country estate, above, where she travelled with her husband, Monsieur Mallet, featured in an early promotional pattern feature in a British magazine of 1950. Her luxurious salon, decorated with a connoisseur’s zeal for collectable antiques, right, formed the background to a retrospective profile of 1989, in which Madame Carven commented, ‘I must be surrounded by beauty’.

Carven’s early success was a fresh green and white striped summer frock, which used both fabric and structure (pin-tucks and minute waist, left) to flatter a smaller figure. Named ‘ma griffe’, the design bequeathed its distinctive and new green and white colour scheme as a theme running through many of Carven’s early collections.

The use and persistence of this colour scheme illustrates not just Carven’s personal preference, but her continuting talent for branding herself as a distinctive designer.

A report of 1947 described how Carven took to decorating her collection, both leisure and evening wear, with painted trompe l’oeil false drapes and scenes of ‘country panoramas with cultivated fields, haystacks and a winding road’. Around a skirt hem was painted a border of black and white tiling, toped with a colonnade and views of a formal garden.

This collection playfully reflected her experience of French interior design, and responded to a new mood of frivolity and enjoyment in fashion. In the same year, the modesty skirts overlying her short nautical beach sets featured, ‘a semi-detatched sail belonging to a painted boat on a painted sea’.

‘No other fashion house has travelled as much as hers. Since the war, with only two dressers and half a dozen mannequins, Carven has visited the rich shores of Portugal, colourful Brazil, touched down in both North and South America, seen the golden sands and tropical splendour of North Africa, peeped at the oriental mystery of Egypt.’

A trip to Africa inspired Carven’s spring 1949 collection and Paris show, reported in the New York Times: ‘Carven’s opening took the spectators to Africa, with mannikins stepping forth from a thatched hut. Mmme Carven brought back from a recent voyage a fund of ideas, novelties and fascinating printed cottons to harmonzies with sun-bronzed skins…’
Dresses carried embroidered ‘natives on the warpath’ brandishing shields, Moroccan cuff decoration, a navy linen frock featured straw patch pockets and Carven placed straw flower embroidery on the necklines of cocktail dresses. Clearly a woman after Louella Ballerino’s heart…

Not only did Carven’s imagination have global reach in design terms, but she became one of the most successful female leisure-wear or ‘young’ fashion designer in licensing and selling her work overseas, from East Asia to New York.

Descriptions of Carven’s early collections detail some decorative features she used to evoke exotic associations. This extensive promotion of 1950 shows how she used ethnic and global themes to shape the line of her designs. A pattern licensed for distribution to readers of ‘Woman’s Illustrated’ provided the opportunity for an extensive promotion of Carmen and her aspirational lifestyle:

“Have you ever wondered how a designer finds the inspiration for a new line?… We don’t know all the answers… but we do know that the call and lure of distant lands have inspired Carven to a certain extent.

This season, she says, she was dreaming of Asia … Asia, to-day, whose dreams and traditions are threatened but whose treasures will always live in the hearts of all thinking people… Carven is determined that the richness and colourful beauty of Asia shall never die.’ And so – she has created the ‘Lantern Line.’ With its puffed shoulders, narrow hipline and sudden flaring into fullness under the knee, it is reminiscent of a Chinese lantern

Her evening clothes, too, have the faint but haunting memory of the Orient. Gold shines in small flowers, and together with brilliant coloured embroideries, they show a decided Persian and Chinese inspiration… 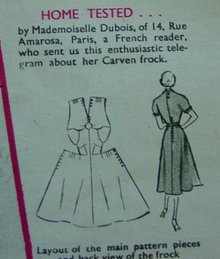 Woman’s Illustrated gave a colourful account of Carven’s early years and the reasons for her success:

‘In the broiling Indian Summers of those days Carven began to create the most adorable Summer frocks. Paris began to talk, smart women everywhere went to Carven and emerged smarter still.

And yet that does not mean the taller woman is unable to buy anything from the House of Carven. Indeed, just the opposite… It is a pleasure to be dressed by Carven…

For it is her job to design the right, the perfect, clothes for every woman to match her own individual personality, to pay a compliment to her beauty, enhance her loveliest features and disguise those of which she is not so proud.
There, we think, lies the secret of her success. She gives women the kind of clothes they want to wear, and in doing so has created a style which is entirely her own….

“There is no need for a trademark, no need for a name… her beautiful clothes can be recognized by the sheer skill and simplicity of line and fastidious attention to detail that are hers alone…. Madame Carven has designed a frock for you. ‘Lily of the Valley’ she has called it. For that dainty white flower instinctively reminds one of youth and beauty, laughter and gaity… This, then, is a frock for youth! Simply cut… it emphasises the clean, supple lines of the young girl… Its subtle rightness and air of distinction make this a frock in a million – a frock designed to make its wearer more beautiful, more desirable and, above all, more feminine.”

Carven’s presence on the fashion scene until the mid-late 1950s was as a couture creator of innovative teen and leisure fashions. But subsequently, never one to miss an opportunity, Carven joined other Paris designers in producing ready-to-wear collections, which could either be exported, or licenced for production overseas.

For example, in spring 1958, Marianne Charlier, Paris buyer for ‘Miss Bergdorf’ selected thirty out of sixty model dresses to be copied by David Crystal in junior sizes, for their new collection in New York. At about the same time, David Crystal produced a Dior licensed line too. 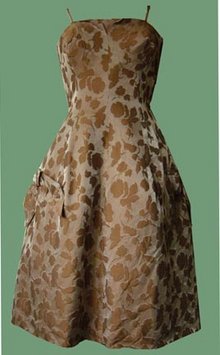 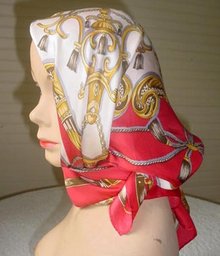 In the UK, the manufacturing house of Marcel Fenez may have played a similar role in distributing Carven’s ready-to-wear models; this frosted chocolate party dress, left, is a product of the Fenez-Carven collaboration.

Both Dior and Carven licensed sweater designs at around the same time (mid-1950s) but although Lyle and Scott still celebrate their Dior designs, Carven’s collaborator remains unclear.

Despite her inventive sports-clothes of the late 1940s-c. 1950, by the end of the decade, Carven became increasingly known internationally for quality, teen-sized evening clothes. Nevertheless, accessories were produced alongside dresses from the very first collections. Another product which became a widely disseminated token of Carven’s design was the printed headscarf – collections of these were first produced c. 1955. More recently, the Carven brand was expanded to include leather bags and sunglasses.

Carven’s presence in southeast Asia, and particularly Japan, became very strong. Her reputation as a global designer is perhaps suitably bolstered by the fact that she designed Air France air hostess costumes in the late 60s-70s. 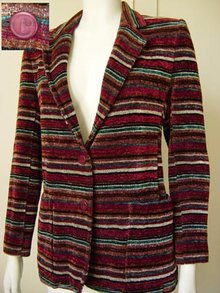 This chenille-pile blazer seems to be a 1980s product, with monogram ‘C’ buttons. It was purchased in Japan and has a Japanese care label. ‘Miss Carven’ was a petite-sized line distinct from the older ‘Carven Junior’ label (for girls) produced in the 1950s-1960s. The colours, wine, rust, olive, rich green and ultra marine, are strangely close to the palette favoured by Carven in her first few years of couture collections reported in the New York Times.

Within the next few years, Carven retired from the running of her design firm and Carven’s haute couture collections ceased. After the company was bought by a businessman (Daniel Harland) Pascal Millet was installed as artistic director in 2001, and brought Carven dresses back to the runways while reining in the brand’s more detached licensed lines. Fashion Windows reported more recently that luxury leather goods firm, Arco, has acquired Carven, with Millet still in post, for four million Euros. 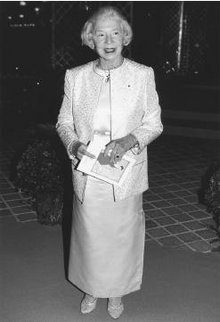