The alligator skin which is used today can be found in swamps and slow moving streams in Florida up to North Carolina. Alligator skin is very tough and durable. The actual back is ridged with many small bones which are called osteoderms. The belly however is very smooth and this is what we often see the higher quality handbags and shoes, etc. made from.

Some tips for identifying real and faux alligator purses are:

While leather can be made from the skins of sting rays to the skins of
kangaroos, most leather comes from cattle skin. The prime advantage of
cattle leather is its large size. It is used for everything from watch
straps to floor-length coats. The specific treatment of the hide can
create different effects, Many people prefer this leather as it can
breathe, making it ideal for shoes, purses, and other accessories

‘Slink’ is leather made from the skin of unborn calves. It is
particularly soft, and is valued for use in making gloves.

‘Nubuck’ is top-grain cattle hide leather that has been sanded or buffed
on the grain side, or outside, to give a slight nap of short protein
fibers, producing a velvet-like surface.

The US is the largest producer of bovine hides and skins.

Although the use of Crocodile skin has been banned in many parts of the world, it is still available and it is still being used in the making of purses, belts, shoes etc.

It is very pliable as well as being a very sturdy leather. The saltwater variety is the most desirable, the Crocodile Porosus.

This is actually the largest reptile and can grow to be 18 feet in length. These are found in South East Asia and the northern Australian coastline. The skin of the Porosus is that which is used in the making of the Hermes Crocodile Birkin bag, which is as top of the line as you get. These particular crocodile skins fetch large sums of money on the leather market.

The tanneries which deal in crocodile leather have to be issued special licenses and they are located mainly in Italy. That being said, there are not many genuine crocodile handbags being produced today and so the cost to purchase one is very high.

Crocodiles have sensory hair on their scales, during the tanning process, the hair is removed but you can see the pores. The skin of the crocodile is more consistent in its patterning than that of the alligator.

Deerskin leather is extremely strong but at the same time very soft and supple.
It has a tendency to stretch over time and can loose its shape with rough wear.

Eel skin has been used to make clothing for centuries. The Native Americans were the first to use it. The use of eel skin was also in use in the Victorian Era. During the
1880s it became popular in the making of the very tight trousers which were favored by men who were known as Mashers – this was the term which was coined at the time for the Dandy, the well-dressed Gent.

The majority of the Conger eel skin, which is used today in the making of purses, wallets, shoes and garments is raised on farms in South Korea. The South Koreans do eat the meat of the eel and in turn the skins are sold to manufacturers. This makes this leather a very sustainable product.

Eel skin is lightweight but very strong. It’s also very supple which makes it easier to cut and shape than regular cowhide or pigskin leathers. It also absorbs dyes very easily and the colors are very vibrant due to its natural sheen.

It is gaining in popularity with many top designers due to its unique grain, ease of use and the fact that it is eco-sustainable.

Elephant leather is primarily produced from the body of the African elephant. These skins are called panels. Other parts of the elephant are also used but in much smaller quantities.

Common colors include black, dark brown and tan but it can be dyed in a variety of colors. The leather is prized for its depth of character and texture, durability and softness.

Frog skin leather is prized for its beauty and durability.

The tanning process creates a product that is extremely soft and supple. After tanning, the leather can be finished in a variety of colors. Toad/frog leather has a fine, smooth grain.

Bullfrog skin creates a leather that is soft and smooth yet retains a characteristic bumpy pattern. This exotic leather can be used in the manufacture of wallets, purses, shoe uppers, hats and gun holsters.

Kid gloves were commonly worn from the from the nineteenth to the early
twentieth century and are still made today. Goatskin leather is softer
than cow skin leather and tougher than sheepskin leather. It is used for
shoes and boots, jackets and other clothing that require a soft durable
leather.

Cashmere goats produce a cashmere fiber that is extremely fine and soft.
Cashmere is used for quality sweaters and men’s sports jackets, but can
also be found and appreciated in any garment that touches the skin with
its silky light touch, from scarves to cashmere socks and underwear.

Mohair comes from the angora goat and is one of the oldest textile
fibers in use. It is 2 ½ times as strong as wool and has a high luster
and sheen. Mohair is often used in blends with other fibers and is found
in scarves, winter hats, suits, sweaters, coats, and socks.

Lizard skins are used for boots, shoes, handbags, cuffs, belts, and
wallets. The hides are very thin yet not prone to tearing, making them
useful for hand-stitching applications

Ostrich are native to the African continent but are farmed worldwide. Ostrich feathers have been used in fashion for thousands of years and were at one time worth more than their weight in gold.

The best plumes are from the African male bird and were used for centuries in men’s hats, then later after the late 18th century the millinery usage was exclusively for women’s hats. Also used for capes, hand fans, boas, muffs, and trimmings on a variety of clothing and accessories. At the peak of their popularity during the “feather fashion craze” of the early 20th century, plumes were found in dozens of sizes, made into fantastic shapes and amazing types. Sadly, most feathers today are plain and thin compared to the preferable antique variety.

Ostrich eggs are used for beautiful carvings and jewelry.

Contrary to popular opinion, an ostrich’s feathers are not plucked, they are cut from the body with sharp scissor like tools.

Pigskin leather is a medium-weight leather used for many items including
gloves and jackets. Generally it is softer than other leathers, but it
can be finished in the same way so it is difficult to identify a pigskin
article simply by looking at it. Using a microscope, the hair follicles
of a pig go vertically right through the skin. With a cow hide the hair
follicles are at an angle.

Snake skin is often seen in footwear as well as in purses and belts It
is also used for decorations like hat bands, or trim for vests and other
wear. The most common snake skins used in handbags and accessories
include cobra, karung, and python.

In the 1850’s tortoise shell was the choice material for ladies’ hair
combs. The hawksbill sea turtle, known for their beautiful brown mottled
shell, were put on the endangered list in 1970.

Tortoise shell fakes are rife. One of the first materials to simulate
tortoise shell was horn, derived mainly from various breeds of cattle. A
close examination shows that the mottled effect has been painted on the
surface. It does not go completely through it, as is the case with
natural turtle shell. Celluloid “tortoise shell” was molded not carved. 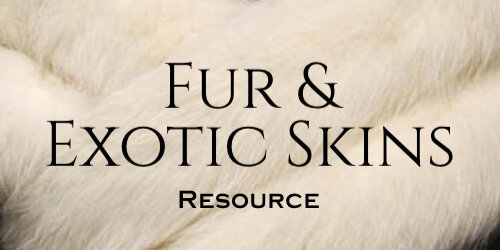