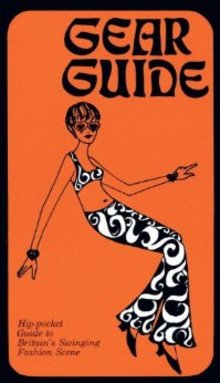 This quirky, fascinating little book was originally published in 1967 by Atlas Publishing, London.

A facsimile of the original pocket guide to the boutiques of Swinging London, this book is a must- have stocking filler for Christmas, or just a neat affordable addition to your own fashion library.

Written in eight concise chapters and beginning from the 1950s, Gear Guide 1967 charts the rise of Young British fashion including the pop music, photographers, and television shows that influenced and created the lively London fashion scene of the mid to late 1960s.

Style leaders such as Mary Quant are covered in detail, along with developments in fabric technologies and innovative uses of new materials such as PVC and Faux Fur amongst other materials, and their impact on the designs of the period.

Mod fashion, the rise of The Beatles, and Military influenced fashion and vintage clothing, as well as the international impact of British fashion, are also covered.

The main body of the book takes you on a tour of the Kings Road and Carnaby Street, complete with maps, tube stations and other helpful transport information (even including the location of public conveniences if you were caught short…).

Boutiques are all listed in numerical order according to street location, with opening hours, payment options and price guides for each shop on the tour.

The text is written in a relaxed, witty and humorous style that transports you back completely to when originally written. There are black and white photos, as well as monochrome with spot green fashion illustrations.

The final chapter looks at future trends in fashion and states, concluding that “the pendulum of fashion has always seemed to swing to and fro – it’s just swinging at the moment!”

A fabulous affordable little book, that is a quaint period snapshot of a more innocent time.