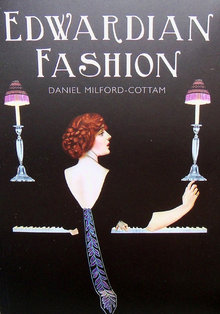 This compact little book is a quick and helpful read for anyone interested in learning more about dress in the first part of the 20th century. It is written from a British viewpoint, but the bountiful content applies across the Western world. Milford-Cottam begins by “Setting the Scene.” This first chapter delineates the differences between pre- and post-Victorian dress, explaining both why and how fashion changed following the death of Queen Victoria in 1901 and ascension of her stylish son, Edward VII. We learn that the Edwardian period includes not only the years of Edward’s reign, but also those of his less sartorially influential son, George V, ending with the outbreak of WWI in late 1914. In the remaining chapters, broken down in roughly 5-year increments, we learn about the start of modern fashion reporting, the rise of female designers, and the most notable trends of each period. The focus is mainly on women’s clothing, but there is a chapter devoted entirely to menswear. Children’s dress is touched on only briefly throughout.

Particularly interesting was the notion that styles newly introduced in the Edwardian era became the basics of contemporary Western dress. The suit, the skirt and blouse, leisure wear worn in public. All were first seen during this brief span. The writing style is straightforward and scholarly, but clear. A basic knowledge of dressmaking terminology, and British-specific terms, would be helpful. The beginner may need to consult other sources, as not every term is defined or illustrated.

Numerous illustrations support the text, including photographs of well-known and anonymous individuals, advertisements, pages from Edwardian periodicals, and artwork. Milford-Cottam ends with a brief but well-illustrated overview of dress in the years 1914-1919, explaining how the First World War changed fashion irrevocably. The book closes with suggestions of museums and galleries to visit in the U.K., Ireland, U.S., and Canada to learn more about fashion history. There is also a helpful index.