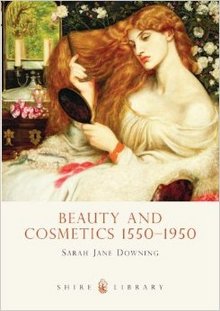 The small size of this book belies the extent of information contained within, including a rich social history.

Beginning with early Christian reactions against the Pagan cultures use of adornment, how concepts of beauty change including the role of religion in perceptions of beauty, is investigated in detail, from the Medieval period, the Renaissance to the Tudor Court and beyond.

An in depth exploration of Queen Elizabeth I explains the political, religious and tactical reasons why her carefully conceived appearance and use of makeup had such an impact on the court and society during her reign.

How makeup was made is discussed in great depth – using recipes, quotes, and illustrated satires from the 16th Century. The use of Mercury, Lead and other poisonous substances in make-up, and the fact that the user was ignorant of the fatal results makes for chilling reading.

The Jacobean Court and its emphasis on feminine beauty over all other qualities, and subsequent Cosmetics Ban by the Puritan Government including black patches is discussed in depth. The wearing of these patches or beauty spots is explained using quotes, illustrations and satirical sketches. Medical reasons for this fashion, such as smallpox along with the importance of the Theatre in the popularity of make up during the restoration; are further explored in the authors examination of the Restoration including colour and black and white portraits and illustrations.

A detailed study of the impact of lead based make up on the Duchess of Coventry and her sister The Duchess of Hamilton, makes for fascinating if sobering reading.

The author discusses the impact of Revolutionary France on perceptions of beauty and makeup, along with Victorian ideals and societal expectations of beauty. Topics covered include the industrial revolution and its impact on makeup manufacturing, along with an often experimental approach to makeup production including the use of Arsenic, Prussic acid along with White Lead and Mercury.

The final chapters explore the impact of Theatre and celebrity on fashion and makeup, including Lillie Langtry and Sarah Bernhardt, and quotes from Oscar Wilde. The impact of emancipation, WW1, WW2 through to the 1950s completes the author’s examination of the history of Beauty and Cosmetics.

Intelligently written with humour throughout and with a strong emphasis on social history, this lushly illustrated book will be of wide appeal.