I would like to tell a little story about a scarf, that in turn tells and connects to so many other stories as only a vintage item can! I originally wrote about this some years ago on my now-sleeping personal blog and was astonished how many comments I received from people around the world, just because they had been searching for the name on a scarf or a hankie. So I thought it would be timely to revisit this story and see if I could find out more.

Here is the scarf that started it all: A lovely vintage silk scarf made by Fisba-Stoffels of Switzerland. I received this as a gift from my best friend. She had selected it because she knew I’d like the colors—plus it said “Swiss Made” on the label, and she thought that was funny. 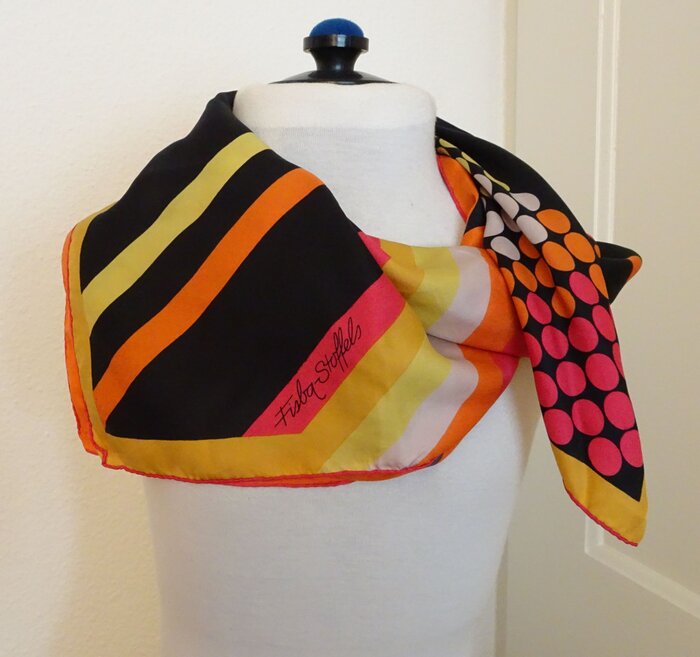 I love the color combination and the groovy print, and I wear it regularly. One day I showed it to my mother. She took one look at the signature on it and said “Oh Fisba-Stoffels—I used to serve old Mrs. Stoffel at the shop in Klosters!” (she worked summer seasons as a tour guide and winter seasons in ski resort shops in the 1960s). Would you believe it? It seems the Mrs. Stoffel in question was quite a character and well known in town. My father, who grew up in Klosters, remembers her too. Apparently, the company mostly produced hankies, but also scarves. So, if the internet turns up nothing, just ask your mom!

So, my curiosity was piqued, and I started doing a bit of research, but could not find much. Revisiting the topic now, I have found quite a bit more information that gives a better picture and brings together two important names in Swiss textile history, especially regarding St. Gallen. Whilst the city is probably most famous for its convent with the abbey cathedral and library, a UNESCO World Heritage Site, it was and is a centre of the textile industry. The production of linen and cotton led to a specialization in lace and embroidery from the mid-18th century. This started as a cottage industry and, with industrialization, morphed into mechanized production. The legacy of this today is companies that specialize in the production of elaborate lace and embroidery fabrics for haute couture.

The two names involved with Fisba-Stoffels, and which are each on their own famous, are Stoffel and Fischbacher. The Stoffel company has its roots with Franz-Xaver Stoffel (1794-1841) dealing in textiles and opening a weaving mill for silk ribbons in 1822. Over the years, the company changed its profile from dealing in textiles to their production, and taking over other textile companies in eastern Switzerland in the course of the 19th and early 20th centuries. The company Stoffel & Cie. (later Stoffel AG) was formally founded in 1888. After World War I, the company’s focus shifted to new materials like synthetic fibers and special textile finishes. The company grew to one of the biggest in the region and by 1960 had offices in Paris and New York and exported its products worldwide. They were also famous for their “Stoffels-Tüechli”—finely woven handkerchiefs, which were first introduced between the two world wars. Starting in 1965, Max Stoffel gradually sold the company to Burlington Industries. This process finished in 1968. The Stoffels brand name continued on for a time it seems, and their fabrics used in garments were labeled “A Division of Burlington Industries Inc.” 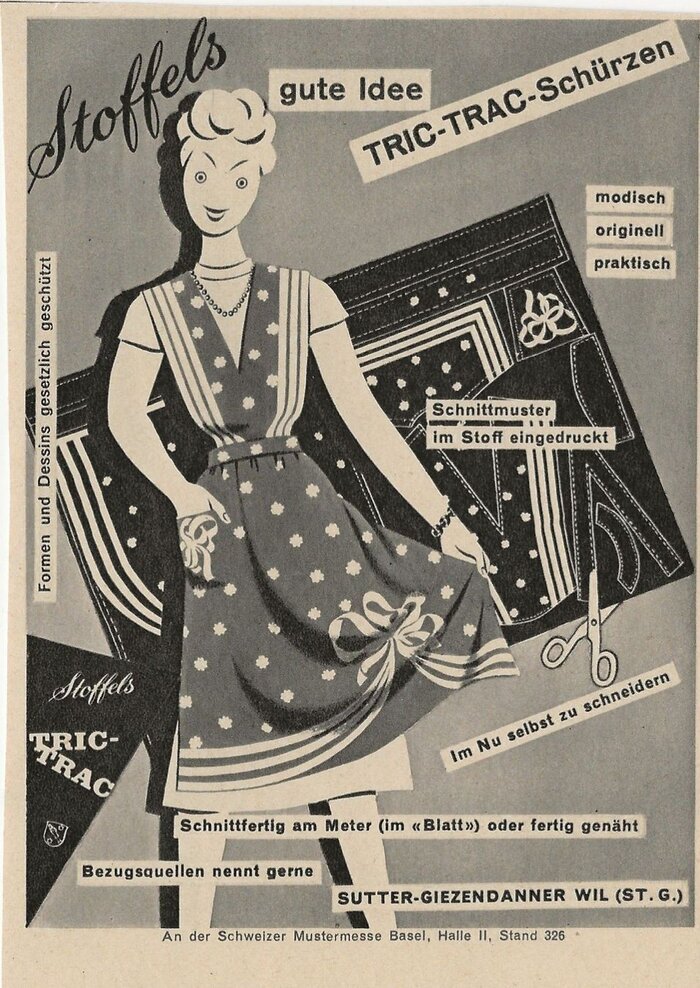 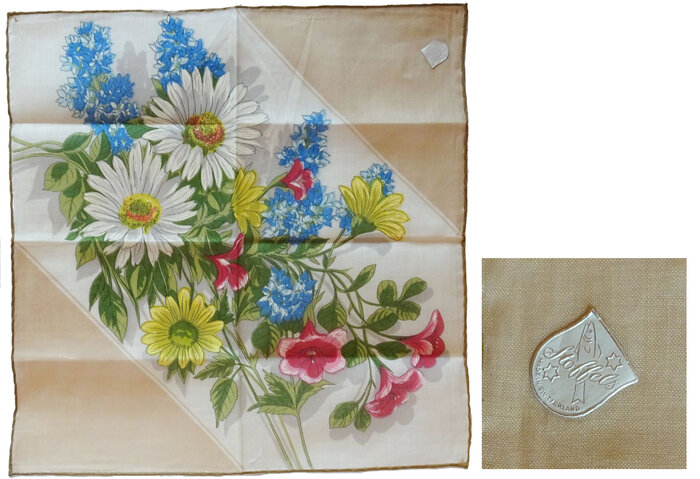 Stoffels handkerchief from the 1960s

The Fischbacher company history runs along similar lines. In 1819, 16-year-old Christian Fischbacher started dealing in textiles by collecting woven fabrics from farmers’ wives and carrying them on foot over 30 kilometers to the market in St. Gallen. The family moved to the city in 1854 and the company continued to grow. The production of handkerchiefs started in the late 19th century and continued to the 1990s. Christian Fischbacher IV moved to the United States in 1939 and founded FISBA Fabrics Inc. in New York, the first subsidiary company, and was its CEO until his return to Switzerland in 1952 in order to take over the family company. American newspapers from the 1950s and 60s show ads for Fisba fabrics, sometimes in conjunction with designer sewing patterns. Thanks to Fischbacher’s experience with the American fashion industry, he expanded the design department in St. Gallen and established connections to Paris haute couture houses. From 1961 onwards, further subsidiaries were added in several European countries and Japan. Whilst the company won the British Design Council Award in 1984, in that decade the focus started to shift from fashion fabrics to home textiles. Today they are known for high-quality bed linens and fabrics for home furnishings. 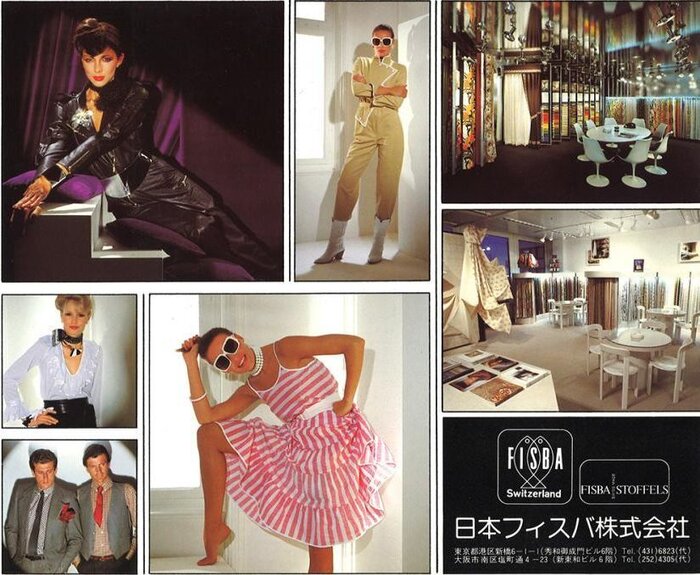 So, where does Fisba-Stoffels come into the picture? After Max Stoffel sold his company, his son Patrick and the Fischbacher company founded Fisba-Stoffels in the late 1960s. He led the company until it folded in 1988, and what was left was completely taken over by Fischbacher. Fisba-Stoffels produced mainly fine, colorfully printed cotton handkerchiefs, souvenir hankies, silk scarves and tea towel calendars. And they went around the world—the National Library of New Zealand holds several examples of souvenir hankies produced for the sale in New Zealand, and I found a 1980s newspaper ad by David Jones Melbourne advertising wool scarf-shawls by Fisba Stoffels! 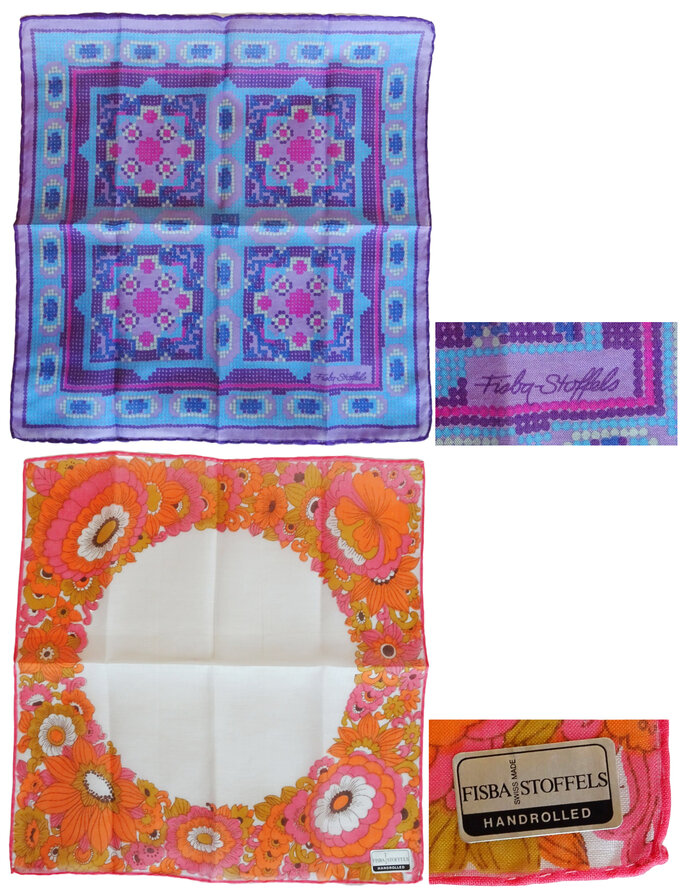 Fisba-Stoffels handkerchiefs from the 1970s