The Queen used colour and design boldly throughout her lifetime to aid recognition but also as a force of symbolism. As a young woman she favored the work of Norman Hartnell, designer of her wedding dress and investiture robes. During a State Visit to Scotland of King Olav of Norway in 1962, Her Majesty The Queen wore a magnificent Hartnell evening gown of pale blue silk faille for a gala performance of Rob Roy at the Royal Lyceum, Edinburgh. 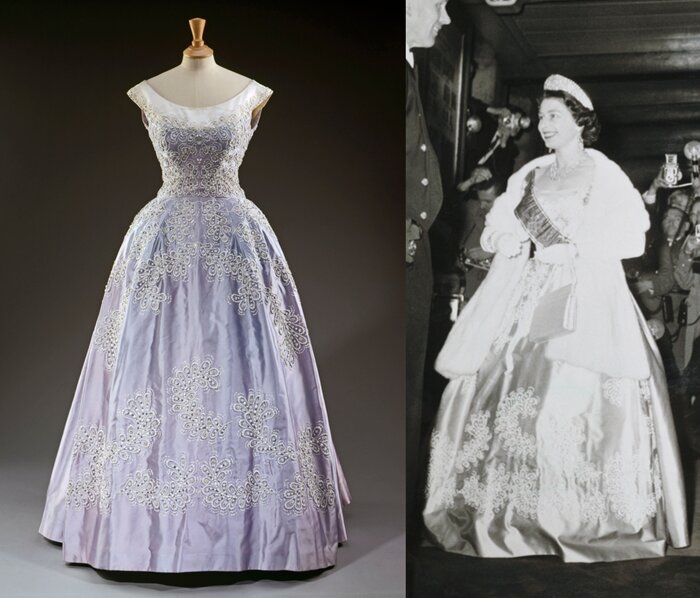 Photographed for “Fashioning a Reign: 90 Years of Style from The Queen’s Wardrobe” held at Her Majesty’s official residences in 2016 / Royal Collection Trust

In her 1945 official portrait, The Queen borrowed a gown from her mother, observing that with the country’s war efforts and continued rationing it would be inappropriate to buy new. 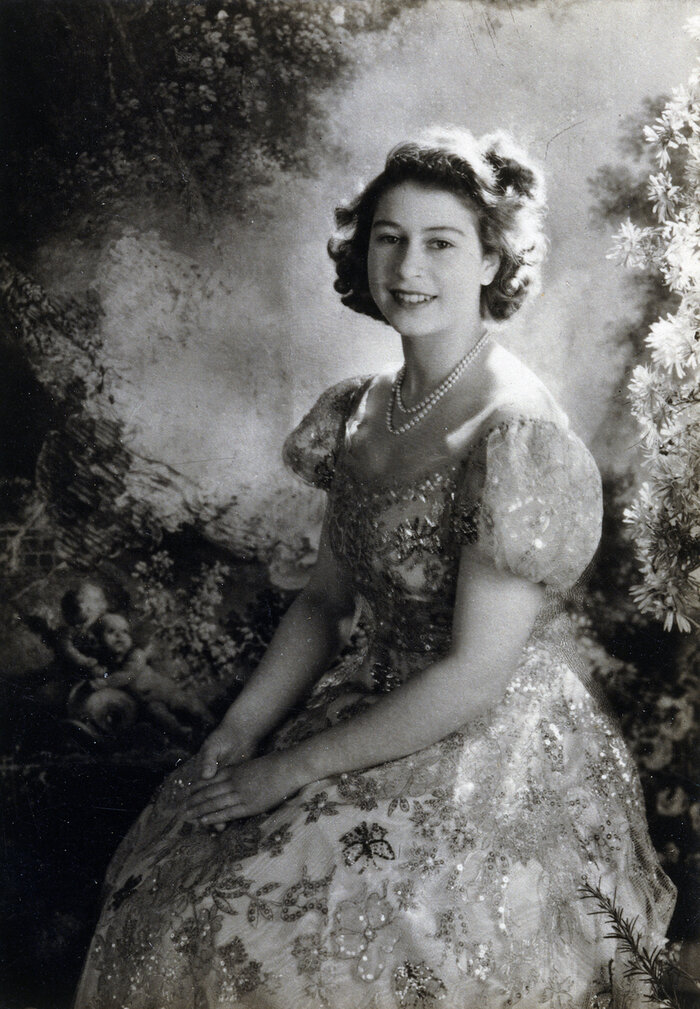 Norman Hartnell created one of the most remembered gowns for The Queen in 1957. During the Canadian State Visit she wore The Maple Leaf dress, which featured a green leaf rather than the red we usually associate with Canada. The green was symbolic of harmony, growth and life. Hartnell used appliquéd green velvet decorated with crystals and faux emeralds. 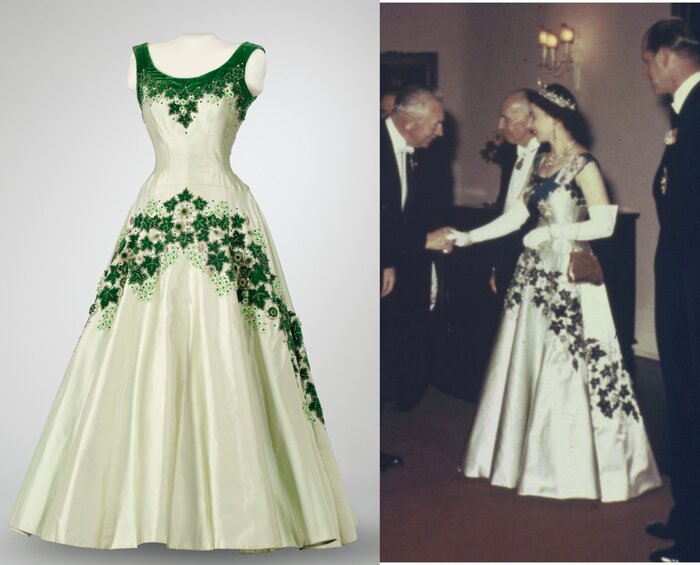 For her 1979 visit to Saudi Arabia, The Queen commissioned a wardrobe of turbans to match her long gowns, to follow modesty guidelines. She did however stick to her bold colour palette. 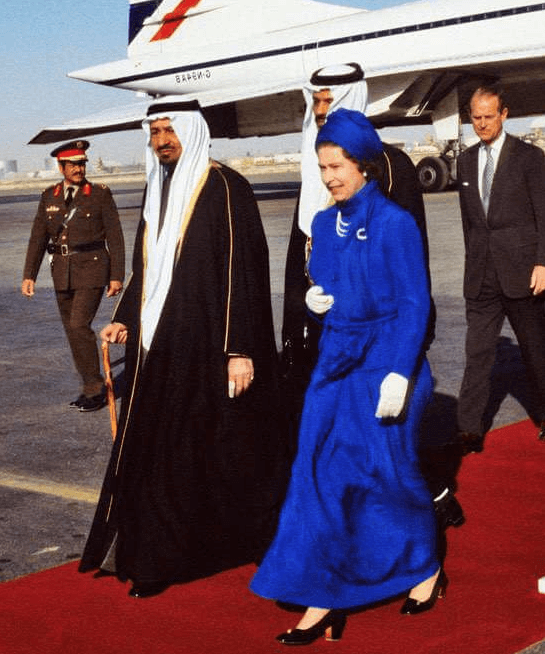 Simone Mirman (1912–2008) was a Paris-born milliner based in London, chiefly known for her designs for the British royal family. In London, Mirman worked with the couturière Elsa Schiaparelli, who was renowned for her bold millinery designs and concepts. She headed the hat department of Schiaparelli’s London branch in Upper Grosvenor Street, Mayfair until it closed down at the outbreak of war in 1939. However, Schiaparelli generously gave Mirman the contact details of her English clientele, enabling her to successfully launch her own business. 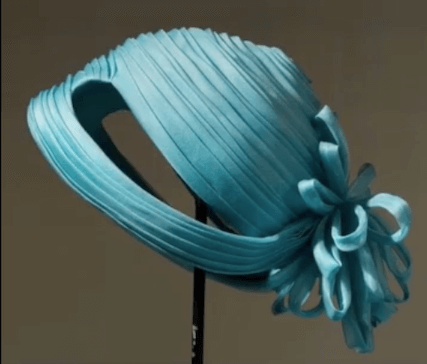 Blue silk hat by designer Simone Mirman, worn by The Queen on her 1977 Silver Jubilee Tour of New Zealand

Norman Hartnell designed this gown for Queen Elizabeth II’s State Visit to Paris in 1957.​​​​​​​​ ​​​​​​​​The dress was embroidered with motifs including miniature bees, grasses, wheat and wild flowers of France. They were constructed with lavish faceted glass, gold beads, mother-of-pearl and gold petals.​​​​​​​​ 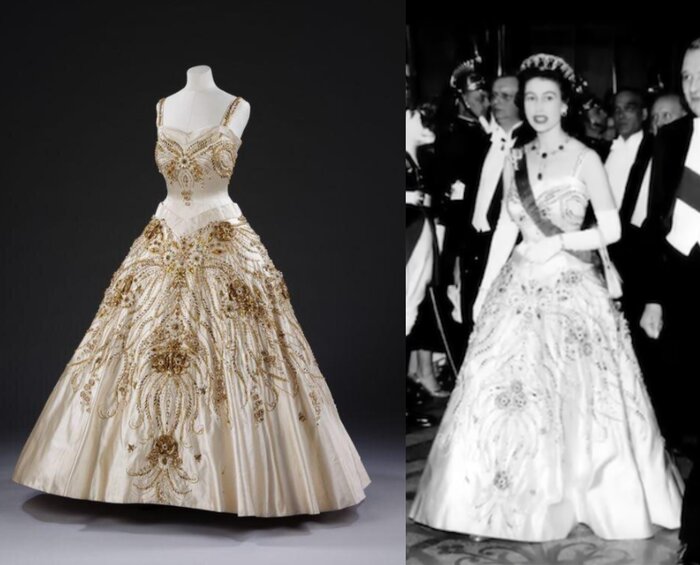 We have to end with The Wedding Gown, when the then Princess Elizabeth wed her true love, Prince Philip, 1947. The dress was designed by Norman Hartnell who, as we know, was a favourite couturier.

​​​​​​​The dreamy wedding dress featured a heart-shaped neckline and 13-foot long train. The dress was embellished with over 10,000 seed pearls in addition to crystals and sequins. And it took 350 women seven weeks to make.​​​​​​​​

The Government granted Princess Elizabeth 200 extra clothing coupons which she used to pay for her wedding dress.​​​​​​​ Clothes rationing ended in 1949.
​​​​​​​​ 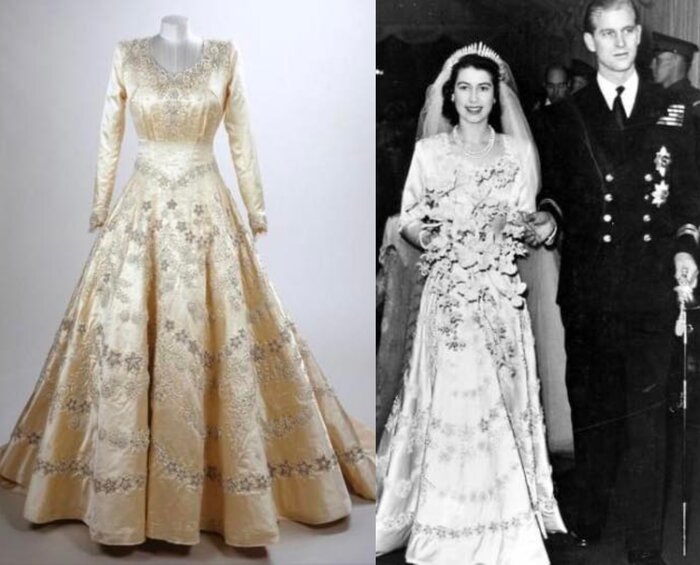