I live a mere 195 miles from Pendleton, Oregon, the home of Pendleton Woolen Mills. Perhaps that explains the amount of vintage Pendleton items I have been fortunate to find in my area. The casual nature of Inland Northwest life might also be thanked.

Of all the versatile, classic pieces made by this venerable company, one particular Pendleton item, called the ’49er Jacket, interests me the most. Ineffably and timelessly cool to my eyes, the ’49er is a sporty basic that Pendleton started making in 1949. It was among the company’s very first articles of clothing for women. Pendleton has made the jacket in many of the years since, with some variations.

The classic is a shirt jacket with flanged shoulders, fullness gathered into the sides of the back yoke, roomy patch pockets with the plaid cut on the bias, big dark shell buttons, and long sleeves with buttoned cuffs. I’ve seen solids, but they are almost always plaid or tartan wool flannel.

People are always surprised at the variety of the plaids used for the jackets made by Pendleton. I get plenty of requests for specific favorite plaids, but almost every one I find differs from every other one I’ve found. A woman once wrote to me that her mother had sewn pockets onto Pendleton ’49ers until 1957. It surprised her to see a vintage ’49er in purple and lime green plaid and asked her mother if that could possibly have been an original ’49er color scheme, and her mother said yes! The variety is wonderful.

It is often very difficult to tell the exact era of a Pendleton ’49er because they have been made similarly for so long. The company still makes wool shirts and jackets for women, but the current (2023) models drift more toward their classic men’s shirt jackets.

If imitation is the most sincere form of flattery, Pendleton should feel deeply admired by the number of companies that copied the ’49er to greater and lesser degrees. Everyone wanted in.

How did Pendleton come to make the ’49er to begin with? According to the company’s blog, “During WWII, men were not the only people enjoying distinctive plaids and ombres in pure virgin wool. Women began to borrow men’s work shirts for both work and warmth. It’s possible that by wearing their husband’s shirts, women kept the memories of their husbands, fiancés and brothers close, though many undoubtedly needed some serious work wear that was simply not available for women at the time. Whatever the reason, women loved Pendleton shirts.”

The name ’49er was not only a tribute to the year it was first made, but, as a Western U.S. company, a nod to the California Gold Rush. The designer was a 41-year-old woman named Berte Wiechmann who had been working at Jantzen, another sportswear company based in Portland, Oregon. Although she based the details on Pendleton’s popular men’s shirts, she chose to use large patch pockets, and those big iridescent shell buttons, to help soften the look. Again according to Pendleton, Wiechmann’s choice of buttons was a black shell beauty from Australia and Tahiti, supplied by J. Carnucci & Sons, NJ.

Researching Weichmann, I came across her designing for Jantzen again in 1958. She was a popular speaker, described in The Capital Journal (Salem, Oregon) as, “an entertaining, peppy and enthusiastic leader in fashions … She’s a riot all by herself.” Weichmann lived to be 101 years of age, dying in 2009.

Here are the Pendleton ’49ers I’ve offered over some years, along with an assortment of very similar jackets by other manufacturers. The last two jackets shown are 1960s variations by Pendleton, both shorter than the original.

A Panoply of Plaids 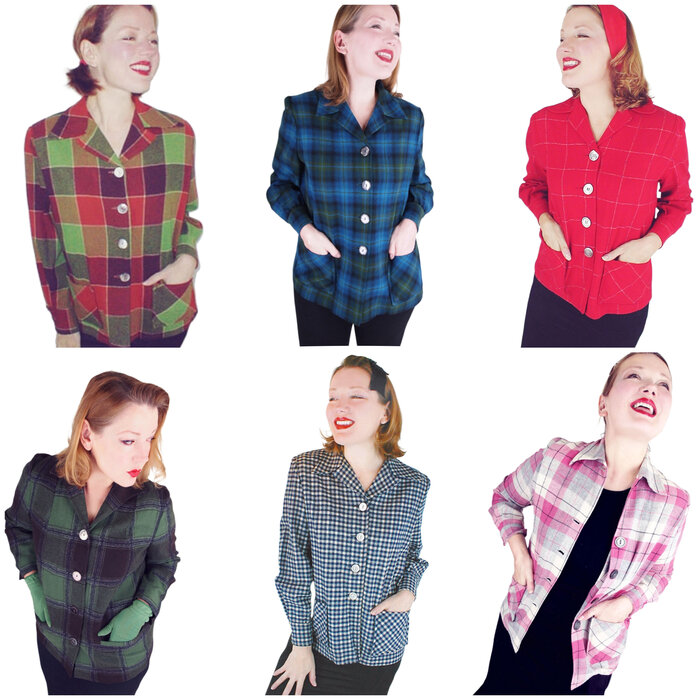 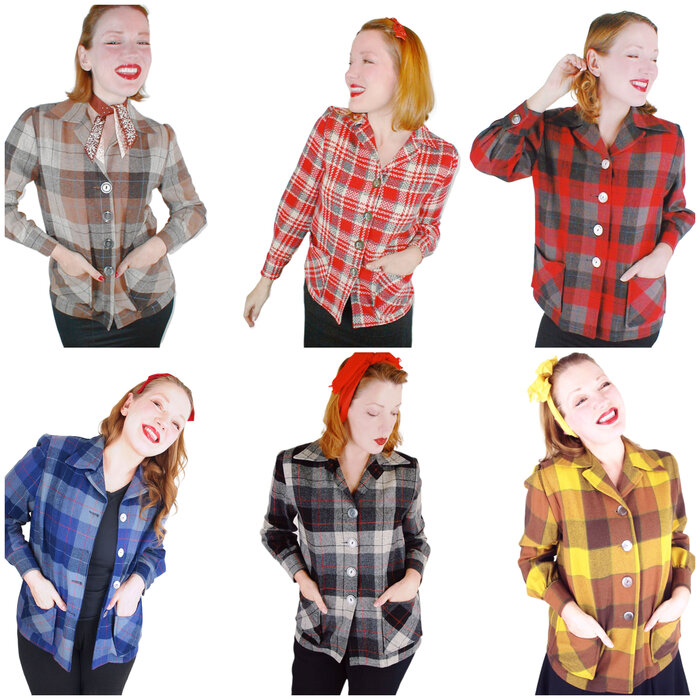 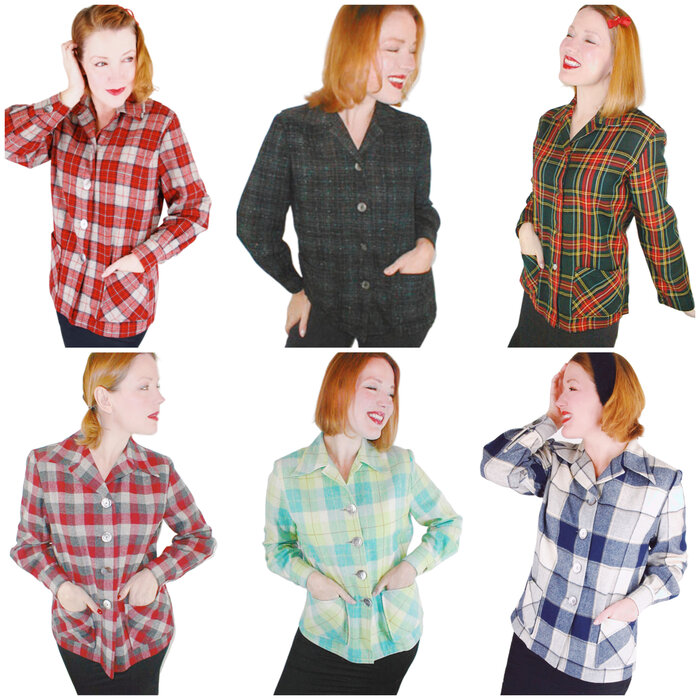 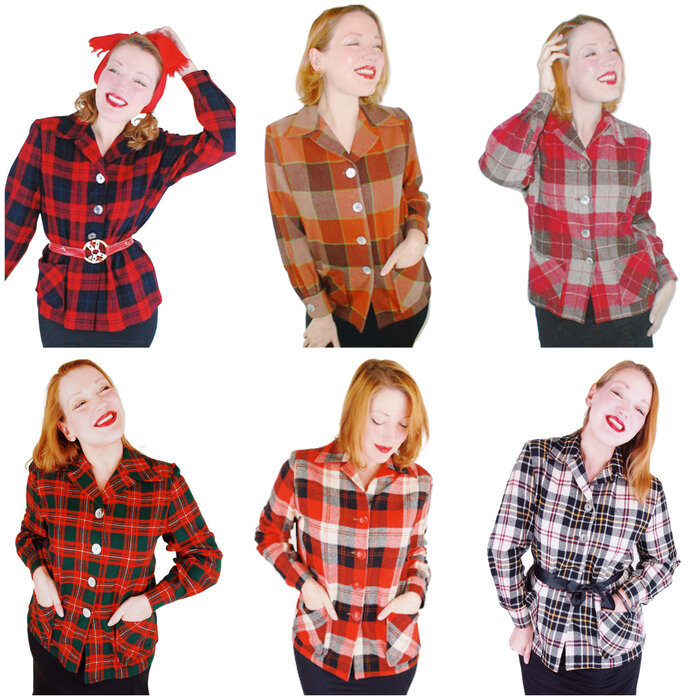 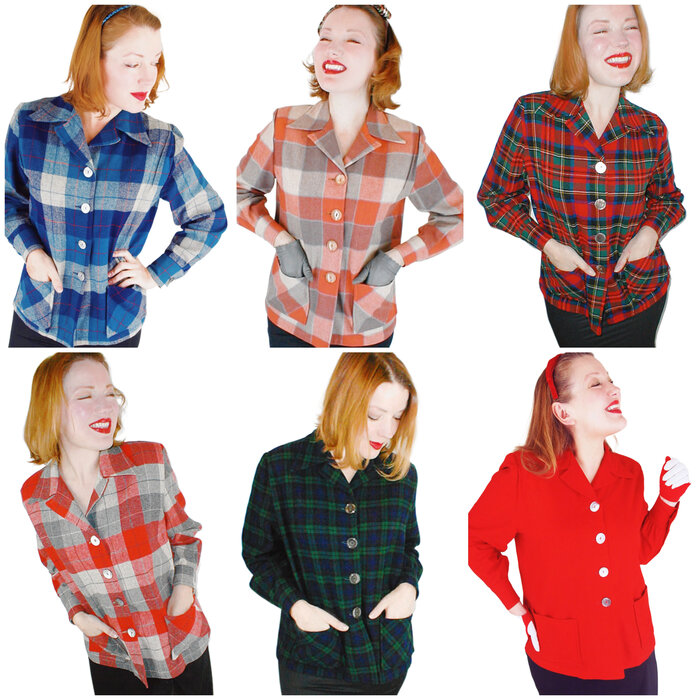 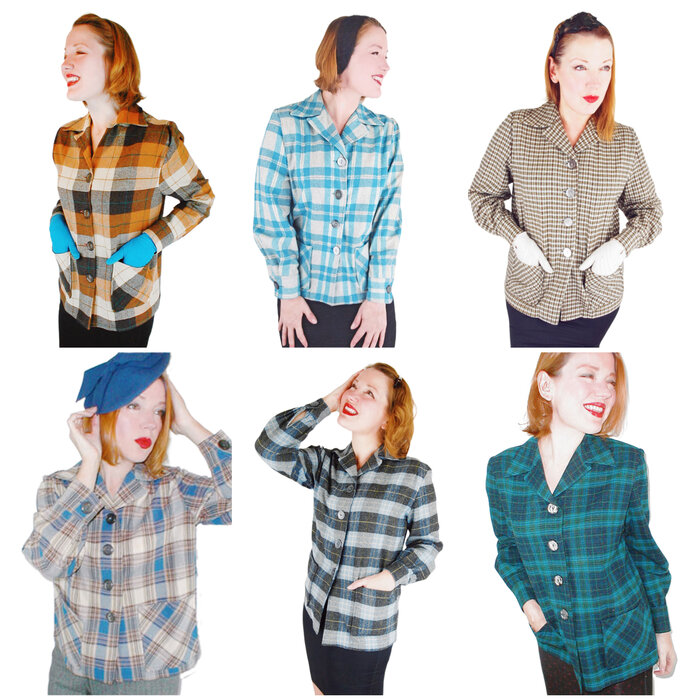 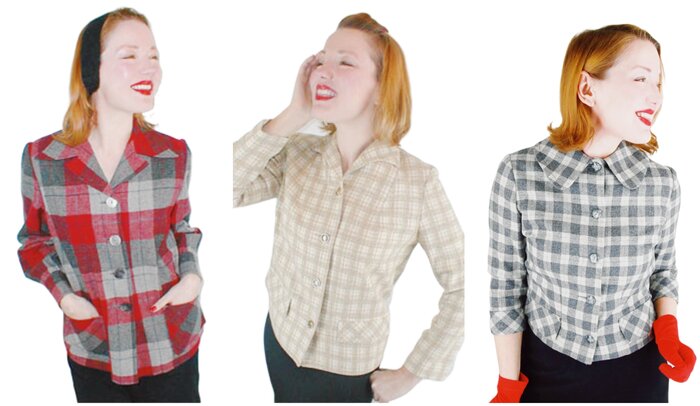 • Pendleton’s white labels are in clothing designed for women, blue labels are in their men’s clothes. You can see examples of many Pendleton labels in the Vintage Fashion Guild’s Label Resource.

• The Woolmark symbol, which shows up on Pendleton labels, was not used before 1964.

Label from a 1950s ’49er jacket; label from a men’s jacket dating from the 1980s. Note the Woolmark symbol in the lower left corner. (Courtesy of the Vintage Fashion Guild Label Resource/Retro Ruth)

• I suggest dry cleaning all woven wool, including Pendleton jackets. Moths and carpet beetles love this wool, so it is important to keep it clean.

• The dark shell buttons used on Pendleton ’49ers are prone to chipping—which is why many a vintage ’49er will have replacement buttons. Ask your dry cleaner to cover them for protection, or remove them yourself and resew them when the jacket comes home. You won’t be sorry. 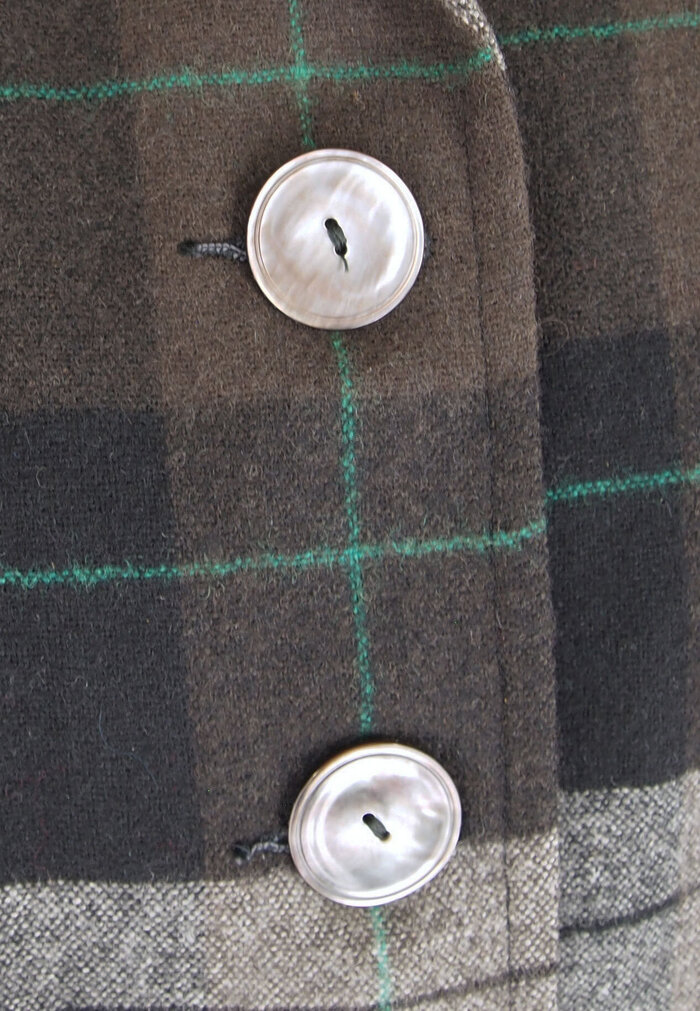 • What is a shoulder flange?

Do you see the pleat from the top of the shoulder into the front of the jacket? It’s that flange that gives the ’49ers shoulders great definition, as well as some extra room.

This is the panel of fabric across the upper back, designed to support the shoulder and back fabric of a shirt. The ’49er borrows this feature from menswear.

Fabric cut and used for the garment on the diagonal is called bias cut. This cut famously lent give (some horizontal stretch) to 1930s gowns. With the Pendleton ’49er, it sets the plaid at a jaunty angle.

• Finally, there are also vintage ‘49er look-alike sewing patterns so you can make one yourself—perhaps in purple and lime green plaid? 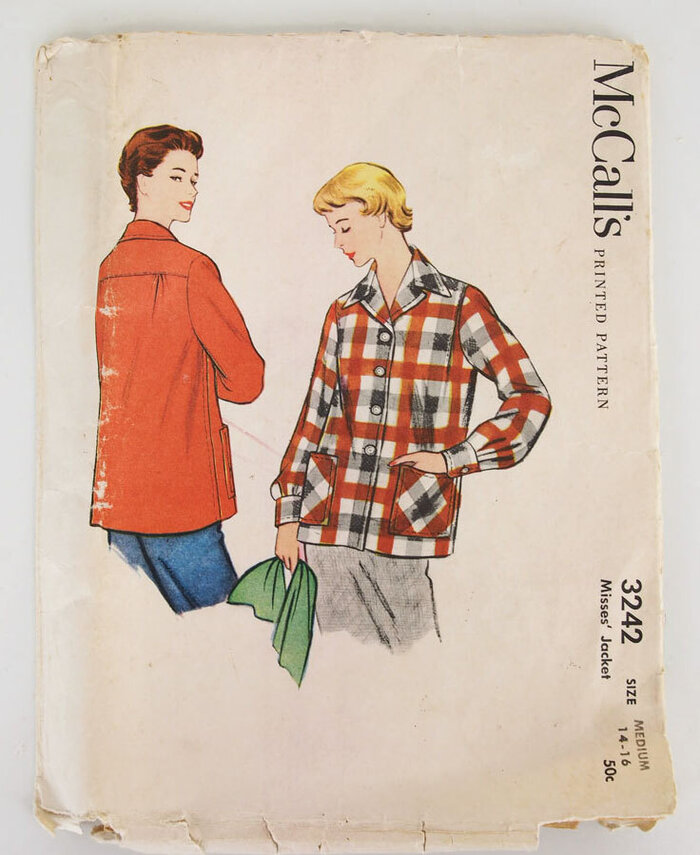